“Paige was an active kid, she danced, she was athletic, she was lots of fun to be with. She was sassy and always stood up for herself. She taught me a lot about standing up for myself and about being tolerant. If I was being a little judgmental of someone, she would be the person to say, Mum, you don’t know what’s led them to that, you need to be a bit nicer. She was a good person. I don’t know if it’s anything to do with me. I think it’s just who she was.” 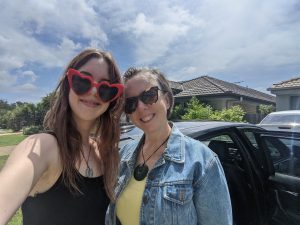 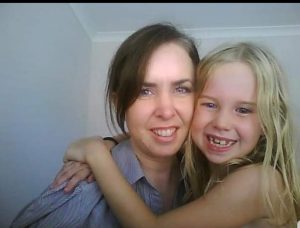 Around August 2020, Paige told her Mum she thought half of her face wasn’t working. She said, “Look when I smile, this side doesn’t go up properly”.

The doctor’s diagnosis was Bell’s Palsy, which she told Carolyn and Paige would resolve itself within a matter of months.

“I did some research on Bell’s Palsy and it’s supposed to be bad for 72 hours and then slowly improve, but Paige’s facial palsy was getting a little bit worse each week.”

Carolyn took Paige back to the doctor and pleaded for Paige to be sent for an MRI.

“I think she thought that I was just being one of those mums, you know, a bit of a Karen. I thought, “I don’t care if you think I’m a Karen, this is my child. I’m going to push for it”.

Tragically for Paige and her family, the MRI revealed an inoperable and incurable brain stem Glioma.

By this point, Paige couldn’t move one side of her face at all.

“She couldn’t shut her eye properly. She was drooling because she couldn’t close her mouth properly and her tongue was numb so she had to be careful when she was eating.”

Paige started a three-month course of chemotherapy and radiotherapy. She had a biopsy to remove nerve pressure and she felt significantly better.

“Her face worked properly. She didn’t have headaches, and she said, if she wasn’t having treatment, she wouldn’t have even felt like she had cancer. It was a big relief that she wasn’t in pain.”

In January 2021, Paige completed her last radiotherapy session. Devastatingly, the MRI that followed showed that treatment had failed.

Despite the news, Paige’s attitude was inspiring to everyone around her.

“She always used to say that she appreciated her life so much more. She looked for the silver linings in everything. We would be driving home after treatment, and she’d be looking at the sunset. That’s the kind of person she was, always looking for things to enjoy and love.”

Paige’s doctors put her on a new treatment regime – Avastin, and when that failed, Keytruda – the latter which is normally used as a treatment for skin cancer, but which doctors saw as part of an immunotherapy treatment for Paige.

Her mum Carolyn has shared Paige’s story to raise awareness and find a cure.

“I want research done. I want a cure. I don’t want anybody else to go through this. That’s my motivation. I’m confident that [Cure Brain Cancer Foundation] is directing necessary funds into research and campaigning to include new drugs on the PBS, allowing all families access, not just families who can afford them.”

When asked what it means to seeing people fundraising for Cure Brain Cancer Foundation, Carolyn says “it means everything.”

Why Matt is Walking4BrainCancer »
« Thank you