Kalani was diagnosed with an Atypical Teratoid Rhabdoid Tumour (ATRT) – a life-limiting and extremely aggressive paediatric brain cancer. Kalani’s tumour was discovered in her Posterior Fossa fourth ventricle region and it had just started to attach itself to her brain stem. Kalani was diagnosed in March 2017, at just 6 months of age. Kalani underwent treatment at Sydney Children’s Hospital Randwick. This included a full resection brain surgery, 51 weeks of intense chemotherapy, and 27 fractions of focal brain radiotherapy. In July 2018 we celebrated as Kalani rang the end of treatment bell, after also being 17 months in remission. Kalani was given one treatment and cure with only a dismal success rate of 40-50%. 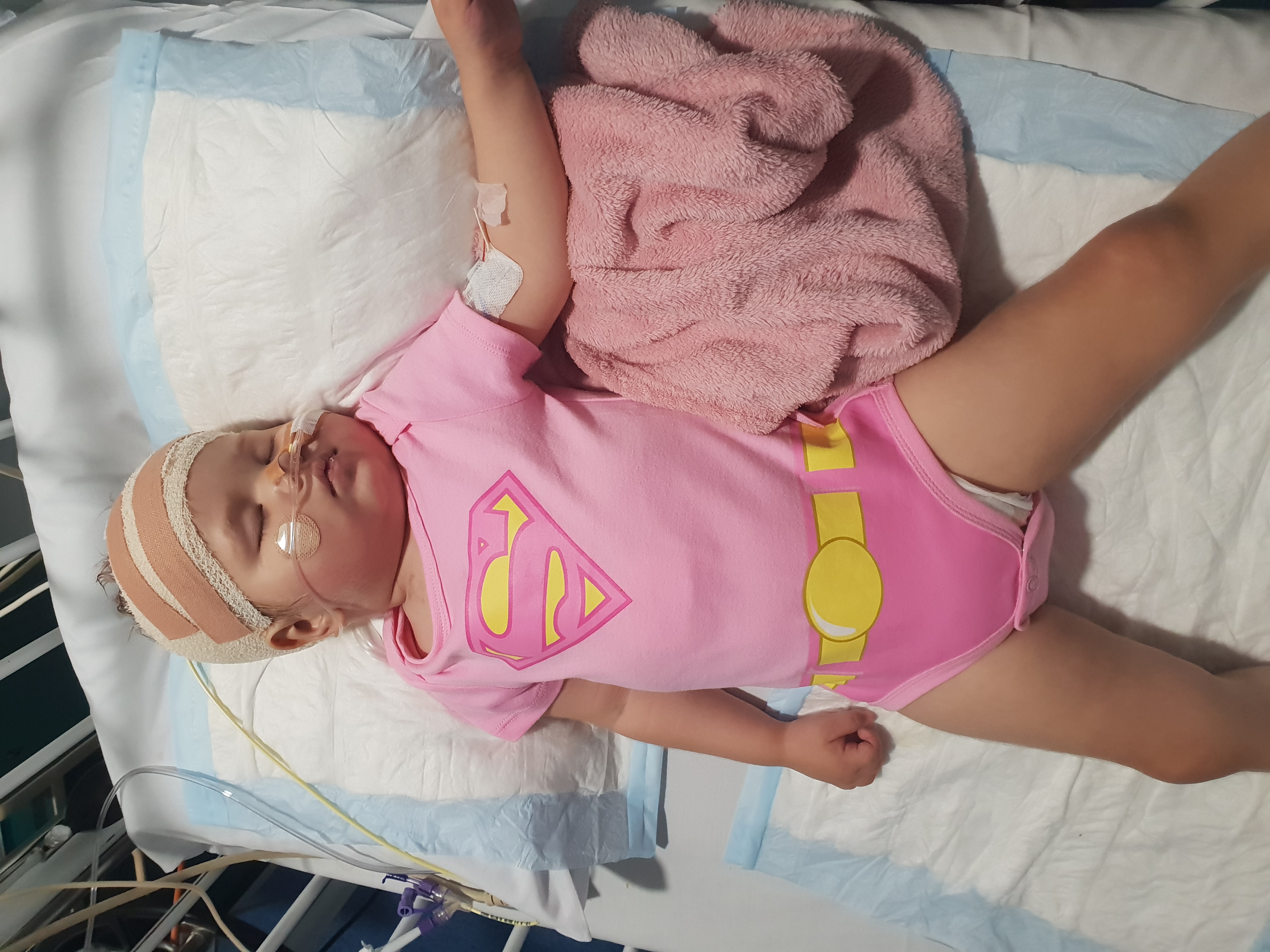 In September 2018, Kalani’s last chemotherapy featured in the Cure Brain Cancer Avant Garde Ball. At the ball we were anxiously awaiting MRI results that would determine whether Kalani was still in remission. We were tentatively advised in September 2018 that a spot had appeared on her scan and they did not know if it was scar tissue or a relapse.

Kalani’s team suggested that more than likely she was relapsing. Heartbreakingly, Kalani relapsed aggressively only four months after the end of her last treatment. Her relapse became official in October 2018. Immediately, she had her second major tumour resection surgery and started a clinical trial. The clinical trial had literally re-opened the week she was recovering in ICU from her surgery. Our family instantly began to fight and praying for a miracle that the clinical trial would stabilise our beautiful baby girl. We also started to make memories with Kalani as a family.

We knew in our hearts that even if the trial was successful it was not a cure and it would only give us more time with her. Our family would have swum to the bottom of the ocean just to have even one more day with our precious baby girl.

Currently, there is only one treatment for ATRT and that was the treatment protocol Kalani bravely endured. On the 8th of December 2018 Kalani was rushed to Bear Cottage in Manly.

Our sweet little angel took her last fighting breath on my birthday, curled up in my arms, hand in hand, as we both slept on the morning of the 12th December 2018.

I held Kalani for three hours after she passed away. I just wanted to keep holding her for as long as I could, hysterically denying that she now lifeless in my arms. The nurses begged to take her away as I cried and her body continued to decompose in my arms. I couldn’t let her go. No amount of goodbyes was ever enough. I just wanted to hold her in my arms forever.

Samples of Kalani’s relapsed tumour were taken and studied. These targeted therapy studies suggested that to save Kalani, she would have needed a number of drugs in combination that the tumour was sensitive to. Some of these drugs were not even common drugs used in this type of cancer treatment. This is why clinical trials and brain cancer research is so fundamentally important in Australia.

Kalani rarely cried throughout treatment, preferring to always laugh and smile. Her smile would light up even the darkest room and she melted many hearts. Our community fell in love with her soothing and calming nature. She was an inspiration to keep fighting and never give up.

Let me first take you back to Kalani’s birth. I knew Kalani was special the moment I first laid eyes on her and held her in my arms. I knew that she would change my life and move mountains. The name Kalani is Hawaiian and literally means Chief of the Sky. At the time I never would have guessed the significance and irony of her name to her life journey.

But Kalani’s cancer did not just stop with Kalani. It consumed our entire family, like a plague destroying every bit of light and happiness in our souls. Replacing it with pain, darkness and fear. Khaleesi spent her second birthday in ICU only two days after her sister’s first brain resection surgery. Meanwhile, Kallen spent his eighth birthday in ICU only days after his sister’s relapse surgery and Kalani’s last breath ended on my birthday, hand in hand. Our family often joked that Kalani always managed to end up making everyone’s birthdays about herself. Everything became about Kalani – her treatment, her hospitalisation, and her care at home.

Kalani’s luck ran out because. Foolishly, our little angel was never in remission (no evidence of disease) and her cancer remained dormant during treatment. She relapsed aggressively post end of treatment. Her cancer claiming every breath she took, as my little baby girl fought, clinging to life, wanting to stay with us every day over those last seven weeks, until that final moment my angel grew wings and left this world behind.

If Kalani was to join the incredibly fortunate list of few legendary brain cancer survivors in this world (just one in 5 survive past five years), Kalani would have lived a life haunted with disabilities due to the impact of her intense treatment. Kalani lost high pitch hearing, requiring full time hearing aids. She was never going to confidently walk, she faced learning disabilities, and had a long way to go with resolving her food aversion as she remained dependent on tube feeding. Kalani’s vision was also a concern as her eyes presented as lazy.

Our family was lucky enough to have participated in the 2017 and 2018 Walk4BrainCancer events in Wollongong with Kalani by our side. Team Kalani comprised of a large team of family and friends who loved and supported Kalani throughout her entire journey. Our team all wore personalised shirts with Kalani’s favourite photo. We wore coloured tutus (Kalani’s favourite outfit), with coloured bows and headbands (Kalani’s signature head pieces as she lost her hair throughout her entire treatment). The Walk4BrainCancer was a day we devoted all our attention to celebrating Kalani’s future and the hope that she was going to remain in remission. The walk was a day we all set aside our fears of relapse and we let our ambitions go – to simply be there for each other and have fun. We were all so proud of Kalani’s bravery, her strength, innocence, and sheer determination to just keep fighting. It brought our family much happiness to cheer on other brain cancer fighters, survivors, and support those families we have grown so fond of, regularly keeping in touch over the years.

In the 2019 Walk4BrainCancer Team Kalani sadly walked grieving our superhero angel. We all walked with a heavy heart, fundraising in the hope that a cure will be found, so that no other families have to go through the pain, devastation, trauma and suffering, that our precious Kalani did.

I have become an integral member of the Walk4BrainCancer volunteer team since 2019. Every year I devote my time and efforts to support our organiser and ambassador Kate Mitrovski, to continue striving for excellence, pushing the Wollongong walk to new limits. Our family and friends see Walk4BrainCancer Wollongong as apart of Kalani’s legacy, history, journey and short memories that we had with our precious little angel. I regard Kate and all the volunteers of the Walk4BrainCancer Wollongong as family now. We all share a common goal in this national movement to stop brain cancer. Our family and Team Kalani will never stop fighting, raising awareness, and this year, walking virtually, until brain cancer stops! 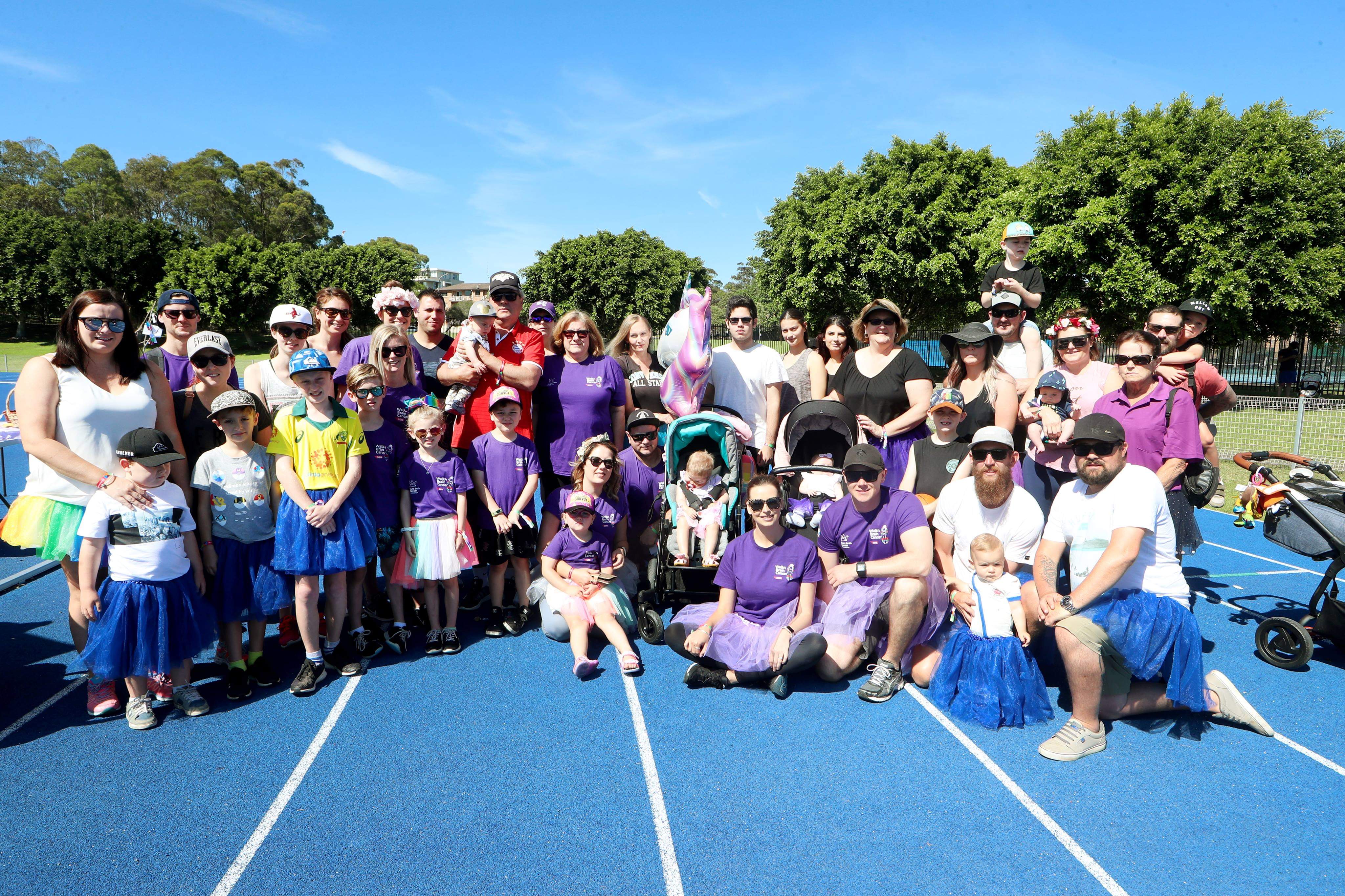 Kalani’s legacy lives on in our hearts. Our little ray of sunshine will always and forever be remembered as our beloved fighter and superhero. Precious daughter of Justin and Charlene. Adored sister of Kallen and Khaleesi. We love you to the Moon and back.

Thank you »
« Why Cass is Walking4BrainCancer